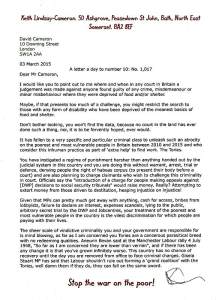 I would like you to point out to me where and when in any court in Britain a judgement was made against anyone found guilty of any crime, misdemeanour or minor misbehaviour where they were deprived of food and/or shelter.

Maybe, if that presents too much of a challenge, you might restrict the search to those with any form of disability who have been deprived of the meanest basics of food and shelter.

Don’t bother looking, you won’t find the data, because no court in the land has ever done such a thing, nor, it is to be fervently hoped, ever would.

It has fallen to a very specific and particular criminal class to unleash such an atrocity on the poorest and most vulnerable people in Britain between 2010 and 2015 and who consider this inhuman practice as part of ‘extra help’ to find work. The Tories.

You have instigated a regime of punishment harsher than anything handed out by the judicial system in this country and you are doing this without warrant, arrest, trial or defence, denying people the right of habeas corpus (to present their body before a court) and are also planning to charge claimants who wish to challenge this criminality in court. Officials say the “introduction of a charge for people making appeals against [DWP] decisions to social security tribunals” would raise money. Really? Attempting to extort money from those driven to destitution, heaping injustice on injustice!

Given that MPs can pretty much get away with anything, cash for access, bribes from lobbyists, failure to declare an interest, expenses scandals, lying to the public, arbitrary secret trial by the DWP and Jobcentres, your treatment of the poorest and most vulnerable people in the country is the vilest discrimination for which people are paying with their lives.

The sheer scale of vindictive criminality you and your government are responsible for is mind blowing, as far as I am concerned you Tories are a cancerous parasitical breed with no redeeming qualities. Aneurin Bevan said at the Manchester Labour rally 4 July 1948, “So far as I am concerned they are lower than vermin”, and if there has been any change it is that you’ve grown infinitely worse. This country has no chance of recovery until the day you are removed from office to face criminal charges. Gisela Stuart MP has said that Labour shouldn’t rule out forming a ‘grand coalition’ with the Tories, well damn them if they do, they can fall on the same sword.