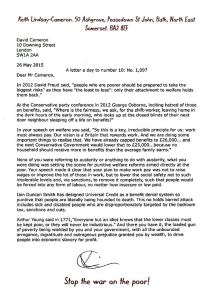 In 2012 David Freud said, “people who are poorer should be prepared to take the biggest risks” as they have “the least to lose”: only their attachment to welfare holds them back.”

At the Conservative party conference in 2012 George Osborne, inciting hatred of those on benefits, said, “Where is the fairness, we ask, for the shift-worker, leaving home in the dark hours of the early morning, who looks up at the closed blinds of their next door neighbour sleeping off a life on benefits?”

In your speech on welfare you said, “So this is a key, irreducible principle for us: work must always pay. Our vision is a Britain that rewards work. And we are doing some important things to realise that. We have already capped benefits to £26,000… and the next Conservative Government would lower that to £23,000…because no household should receive more in benefits than the average family earns.”

None of you were referring to austerity or anything to do with austerity, what you were doing was setting the scene for punitive welfare reforms aimed directly at the poor. Your speech made it clear that your plan to make work pay was not to raise wages or improve the lot of those in work, but to lower the social safety net to such intolerable levels and, via sanctions, to remove it completely, such that people would be forced into any form of labour, no matter how insecure or low paid.

Iain Duncan Smith has designed Universal Credit as a benefit denial system so punitive that people are literally being hounded to death. This no holds barred attack includes sick and disabled people who are disproportionately targeted by the bedroom tax, sanctions and cuts.

Arthur Young said in 1771,”Everyone but an idiot knows that the lower classes must be kept poor, or they will never be industrious.” And there you have it, the loaded gun of poverty being wielded by you and your government, with all the unbounded arrogance, ingratitude and outrageous prejudice granted you by wealth, to drive people into economic slavery for profit.