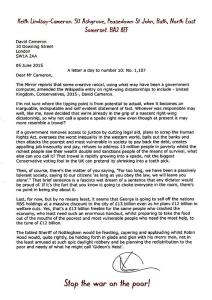 The Mirror reports that some creative rascal, using what may have been a government computer, amended the Wikipedia entry on right-wing dictatorships to include – United Kingdom, Conservatives, 2015-, David Cameron.

I’m not sure where the tipping point is from potential to actual, when it becomes an inarguable, indisputable and self evident statement of fact. Whoever was responsible may well, like me, have decided that we’re already in the grip of a nascent right-wing dictatorship, so why not call a spade a spade right now even though at present it may more resemble a trowel?

If a government removes access to justice by cutting legal aid, plans to scrap the Human Rights Act, oversees the worst inequality in the western world, bails out the banks and then attacks the poorest and most vulnerable in society to pay back the debt, creates appalling job insecurity and pay, refuses to address 13 million people in poverty whilst the richest people see their wealth double and sanctions people of the means of survival, what else can you call it? That trowel is rapidly growing into a spade, not the biggest Conservative voting fool in the UK can pretend its shrinking into a tooth pick.

Then, of course, there’s the matter of you saying, “For too long, we have been a passively tolerant society, saying to our citizens ‘as long as you obey the law, we will leave you alone’.” That brief sentence is a fascists wet dream of a sentence that any dictator would be proud of. If it’s the fart that you know is going to choke everyone in the room, there’s no point in being shy about it.

Last, for now, but by no means least, it seems that George is going to sell off the nations RBS holdings at a massive discount to the city of £13 billion even as he plans £12 billion in welfare cuts. Yes, that’s a £13 billion freebie for the same people who crashed the economy, who least need such an enormous handout, whilst preparing to take the food out of the mouths of the poorest and most vulnerable people who need the most help, to the tune of £12 billion.

The fabled Sheriff of Nottingham would be feasting, capering and applauding whilst Robin Hood would, quite rightly, be holding forth in glade and glen with his merry men, not in the least amused at such epic daylight robbery and be planning the redistribution to the poor and needy of what he might call ‘Gideon’s Heist’.