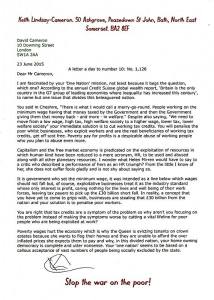 I am fascinated by your ‘One Nation’ mission, not least because it begs the question, which one? According to the annual Credit Suisse global wealth report, ‘Britain is the only country in the G7 group of leading economies where inequality has increased this century’, to name but one issue that divides this beleaguered nation.

You said in Cheshire, “There is what I would call a merry-go-round. People working on the minimum wage having that money taxed by the Government and then the Government giving them that money back – and more – in welfare.” Despite also saying, “We need to move from a low wage, high tax, high welfare society to a higher wage, lower tax, lower welfare society” your immediate solution is to cut working tax credits. You will penalise the poor whilst businesses, who exploit workers and are the real beneficiaries of working tax credits, get off scot free. Poverty pay for profits is a despicable abuse of working people who you plan to abuse even more.

Capitalism and the free market economy is predicated on the exploitation of resources in which human kind have been reduced to a mere acronym, HR, to be used and abused along with all other planetary resources. I wonder what Helen Mirren would have to say to a critic who described a performance of hers as an HR triumph? From the little I know of her, she does not suffer fools gladly and is not shy about saying so.

It is government who set the minimum wage, it was intended as a line below which wages should not fall but, of course, exploitative businesses treat it as the industry standard whose only interest is profit, caring nothing for the lives and well being of their work forces, leaving tax payers to pick up the £30 billion short fall. In reality, a concept that you have yet to come to grips with, businesses are stealing that £30 billion from the nation and your solution is to penalise poor workers.

You are right that tax credits are a symptom of the problem so why aren’t you focusing on the problem instead of making the symptoms worse by cutting a vital lifeline for poor people who are being exploited at work?

Poverty wages hurt the economy which is why the Queen is evicting tenants on crown estates because she wants to flog their homes and they are unable to afford the over inflated prices she expects them to pay and why, in this divided nation, your home owning democracy is complete and utter nonsense. Your ‘one nation’ seems to be based on a callous acceptance of vast numbers of people being socially excluded by the state.