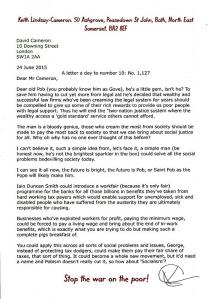 Dear old Pob (you probably know him as Gove), he’s a little gem, isn’t he? To save him having to cut yet more from legal aid he’s decided that wealthy and successful law firms who’ve been creaming the legal system for years should be compelled to give up some of their rich rewards to provide us poor people with legal support. Thus he will end the “two-nation justice system where the wealthy access a ‘gold standard’ service others cannot afford.

The man is a bloody genius, those who cream the most from society should be made to pay the most back to society so that we can bring about social justice for all. Why oh why has no one ever thought of this before?

I can’t believe it, such a simple idea from, let’s face it, a simple man (be honest now, he’s not the brightest sparkler in the box) could solve all the social problems bedevilling society today.

Iain Duncan Smith could introduce a workfair (because it’s only fair) programme for the banks for all those billions in benefits they’ve taken from hard working tax payers which would enable support for unemployed, sick and disabled people who have suffered from the austerity they are ultimately responsible for causing.

Businesses who’ve exploited workers for profit, paying the minimum wage, could be forced to pay a living wage and bring about the end of in-work benefits, which is exactly what you are trying to do but making such a complete pigs breakfast of.

You could apply this across all sorts of social problems and issues, George, instead of protecting tax dodgers, could make them pay their fair share of taxes, that sort of thing. It could become a whole new movement, but it’d need a name and Pobism doesn’t really cut it, so how about ‘Socialism’?