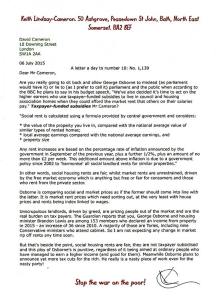 Are you really going to sit back and allow George Osborne to mislead (as parliament would have it) or lie to (as I prefer to call it) parliament and the public when according to the BBC he plans to say in his budget speech, “We’ve also decided it’s time to act on the higher earners who use taxpayer-funded subsidies to live in council and housing association homes when they could afford the market rent that others on their salaries pay.” Taxpayer-funded subsidies Mr Cameron?

“Social rent is calculated using a formula provided by central government and considers:

Any rent increases are based on the percentage rate of inflation announced by the government in September of the previous year, plus a further 1/2%, plus an amount of no more than £2 per week. This additional amount above inflation is due to a government policy since 2002 to ‘harmonise’ all social landlord rents for similar properties.”

In other words, social housing rents are fair, whilst market rents are unrestrained, driven by the free market economy which is anything but free or fair for consumers and those who rent from the private sector.

Osborne is comparing social and market prices as if the former should come into line with the latter. It is market rent prices which need sorting out, at the very least with house prices and rents being index linked to wages.

Unscrupulous landlords, driven by greed, are pricing people out of the market and are the real burden on tax payers. The Guardian reports that you, George Osborne and housing minister Brandon Lewis are among 153 members who declared an income from property in 2015 – an increase of 36 since 2010. A majority of those are Tories, including nine Conservative ministers who attend cabinet. So I am not expecting any change in market rip off rents any time soon.

But that’s beside the point, social housing rents are fair, they are not taxpayer subsidised and this ploy of Osborne’s is punitive, regardless of it being aimed at ordinary people who have managed to earn a higher income (and good for them). Meanwhile Osborne plans to announce yet more tax cuts for the rich. He really is a nasty piece of work even for the nasty party!