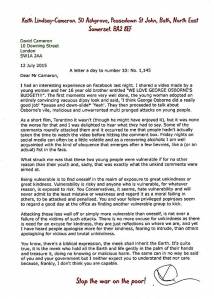 I had an interesting experience on Facebook last night. I shared a video made by a young woman and her 16 year old brother entitled “WE LOVE GEORGE OSBORNE’S BUDGET!!!”. The first moments were very well done, the young woman adopted an entirely convincing vacuous dipsy look and said, ‘I think George Osborne did a really good job’ *pause and down-slide* ‘Yeah’. They then proceeded to talk about Osborne’s vile, malicious and unwarranted multi pronged attacks on young people.

As a short film, Tarantino it wasn’t (though he might have enjoyed it), but it was none the worse for that and I was delighted to hear what they had to say. Some of the comments roundly attacked them and it occurred to me that people hadn’t actually taken the time to watch the video before hitting the comment box. Friday nights on social media can often be a little volatile and as a recovering alcoholic I am well acquainted with the kind of eloquence that emerges after a few bevvies, like a (or an actual) fist in the face.

What struck me was that these two young people were vulnerable if for no other reason than their youth and, sadly, that was exactly what the unkind comments were aimed at.

Being vulnerable is to find oneself in the realm of exposure to great unkindness or great kindness. Vulnerability is risky and anyone who is vulnerable, for whatever reason, is exposed to risk. You Conservatives, it seems, hate vulnerability and will never admit to the least mistake or weakness and regard it as a moral failing in others, to be attacked and penalised. You and your fellow privileged popinjays seem to regard a good day at the office as finding another vulnerable group to kick.

Attacking those less well off or simply more vulnerable than oneself, is not ever a failure of the victims of such attacks. There is no more excuse for unkindness as there is need for an excuse for kindness, they are just reflections on where we are, and yet I have heard people apologise more for their kindness, fearing to intrude, than others apologising for vicious and brutal unkindness.

You know, there’s a biblical expression, the meek shall inherit the Earth. It’s quite true, it is the meek who hold all the Earth and life gently in the palm of their hands and treasure it, doing no knowing or malicious harm. The same can in no way be said of you and your government but I neither expect you to understand that nor care because, frankly, I don’t think you are capable.