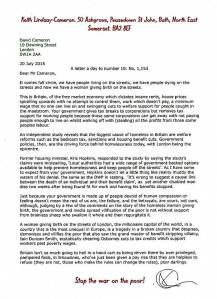 This is Britain, of the free market economy which dictates insane rents, house prices spiralling upwards with no attempt to control them, work which doesn’t pay, a minimum wage that no one can live on and swingeing cuts to welfare support for people caught in the maelstrom. Your government gives tax breaks to corporations but removes tax support for working people because those same corporations can get away with not paying people enough to live on whilst walking off with (stealing) all the profits from those same peoples labour.

An independent study reveals that the biggest cause of homeless in Britain are welfare reforms such as the bedroom tax, sanctions and housing benefit cuts. Government policies, then, are the driving force behind homelessness today, with London being the epicentre.

Former housing minister, Kris Hopkins, responded to the study by saying the study’s claims were misleading, ‘Local authorities had a wide range of government-backed options available to help prevent homelessness and keep people off the streets’. As I have come to expect from your government, Hopkins doesn’t let a little thing like reality muddy the waters of his denial, the same as the DWP in stating,  ‘It’s wrong to suggest a causal link between the death of an individual and their benefit claim’, as  yet another disabled man dies two weeks after being found fit for work and having his benefits stopped.

Just because your government is made up of people devoid of human compassion or feeling doesn’t mean the rest of us are, the failure, and the betrayals, are yours, not ours, although, judging by a few of the comments on the story of the homeless woman giving birth, the government and media spread vilification of the poor is not without support from brainless sheep who swallow it whole and then regurgitate it.

A woman giving birth on the streets of London, the millionaire capital of the world, in a country that is the most unequal in Europe, is a tragedy in a broken country that despises, demonises and vilifies the poor that also saw the grand master of benefit stripping villainy, Iain Duncan Smith, ecstatically cheering Osbornes cuts to tax credits which support workers paid poverty wages.

Britain isn’t so much going to hell in a hand cart as being driven there by over privileged, pampered fools, in limousines, who’ve just been given a pay rise that they are helpless to refuse (they are not, those who make the rules can change the rules), poor darlings.