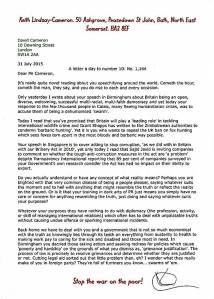 It’s really quite novel reading about you speechifying around the world. Cometh the hour, cometh the man, they say, and you do rise to each and every occasion.

Only yesterday I wrote about your speech in Birmingham about Britain being an open, diverse, welcoming, successful multi-racial, multi-faith democracy and yet today your response to the few thousand people in Calais, many fleeing humanitarian crises, was to accuse them of being a dehumanised ‘swarm’.

Today I read that you’ve promised that Britain will play a ‘leading role’ in tackling international wildlife crime and Grant Shapps has written to the Zimbabwean authorities to condemn ‘barbaric hunting’. Yet it is you who wants to repeal the UK ban on fox hunting which sees foxes torn apart in the most bloody and barbaric way possible.

Your speech in Singapore is to cover acting to stop corruption, ‘as we did with in Britain with our Bribery Act in 2010’, yet only today I read that Sajid Javid is inviting companies to comment on whether the tough anti-corruption measures in the act are ‘a problem’ despite Transparency International reporting that 89 per cent of companies surveyed in your Government’s own research consider the Act has had no impact on their ability to export.

Do you actually understand or have any concept of what reality means? Perhaps you are blighted with that very common disease of being a people pleaser, saying whatever suits the moment and to hell with anything that might resemble the truth or reflect the reality on the ground. Or is it that your training in dark arts of PR just means you simply have no care or concern for anything resembling the truth, just doing and saying whatever suits your purposes?

Whatever your purposes they have nothing to do with diplomacy (the profession, activity, or skill of managing international relations) which often has to deal with unpalatable truths without causing undue offence or sparking international incidents.

Back home we have to deal with you and a government that is not so much economical with the truth as knowingly lies through its teeth on everything from austerity to health to making work pay to caring for the sick and disabled and those most in need. In Birmingham you decried those taking action and seeking redress for policies which cause ‘poverty and hardship’ on the grounds of what you dismiss as, ‘grievance justification’. The process of law is precisely to resolve grievances and determine whether they are justified or not. Cutting legal aid sorted out that little problem then, eh? I wonder what they really make of you in foreign parts? They’re full of furriners you know… swarms of ’em.

One thought on “David Cameron, a man entirely unburdened by anything approximating reality”