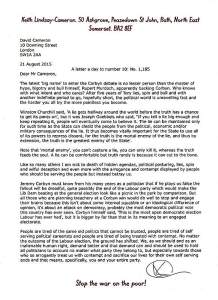 The latest ‘big name’ to enter the Corbyn debate is no lesser person than the master of hype, bigotry and bull himself, Rupert Murdoch, apparently backing Corbyn. Who knows with what intent and who cares? After five years of Tory lies, spin and bull and with another indefinite period to go, hopefully short, the political world is unravelling fast and the harder you all try the more pointless you become.

Winston Churchill said, ‘A lie gets halfway around the world before the truth has a chance to get its pants on’, but it was Joseph Goebbels who said, “If you tell a lie big enough and keep repeating it, people will eventually come to believe it. The lie can be maintained only for such time as the State can shield the people from the political, economic and/or military consequences of the lie. It thus becomes vitally important for the State to use all of its powers to repress dissent, for the truth is the mortal enemy of the lie, and thus by extension, the truth is the greatest enemy of the State’.

Note that ‘mortal enemy’, you can’t capture a lie, you can only kill it, whereas the truth feeds the soul. A lie can be comfortable but truth rarely is because it can cut to the bone.

Like so many others I am sick to death of hidden agendas, political posturing, lies, spin and wilful deception and even more with the arrogance and contempt displayed by people who should be serving the people but instead betray us.

Jeremy Corbyn must know from his many years as a politician that if he plays us false the fallout will be dreadful, quite possibly the end of the Labour party which would make the Lib Dem beating at the general election look like a picnic in the park by comparison. But all those who are planning treachery at a Corbyn win would do well to stop and engage their brains because this isn’t about some internal squabble or an ideological difference of opinion, it’s about an attack on democracy, probably the most democratic political vote this country has ever seen. Corbyn himself said, ‘This is the most open democratic election Labour has ever had’, but it is bigger by far than that in its meaning to an engaged electorate.

People are tired of the same old politics that cannot be trusted, people are tired of self serving political careerists and people are tired of being treated with contempt. No matter the outcome of the Labour election, the ground has shifted. We, as we should and as an inalienable human right, demand better and that demand can and should be used to hold all politicians to account no matter what party they belong to, but especially towards those who so arrogantly treat us with contempt and sacrifice our lives for their own self serving ends and that means, specifically, you and your entire party.

2 thoughts on “Truth, the mortal enemy of lies, you can’t capture a lie, only kill it”