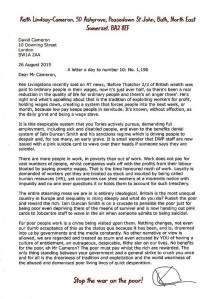 Ken Livingstone recently said on RT news, ‘Before Thatcher 2/3 of British wealth was paid to ordinary people in their wages, now it’s just over half, so there’s been a real reduction in the quality of life for ordinary people and there’s an anger there’. He’s right and what’s appalling about that is the tradition of exploiting workers for profit, holding wages down, creating a system that forces people into the next week, or month, because low pay keeps people in servitude. It’s known, without affection, as the daily grind and being a wage slave.

It is this despicable system that you Tories actively pursue, demanding full employment, including sick and disabled people, and even to the benefits denial system of Iain Duncan Smith and his sanctions regime which is driving people to despair and, for too many, an early grave. It is small wonder that DWP staff are now issued with a pink suicide card to wave over their heads if someone says they are suicidal.

There are more people in work, in poverty than out of work. Work does not pay for vast numbers of people, whilst companies walk off with the profits from their labour bloated by paying poverty wages. That is the time honoured myth of work. Loyalty is demanded of workers yet they are treated as stock and insulted by being called human resources (HR), yet companies can shed workers at a moments notice with impunity and no one ever questions it or holds them to account for such treachery.

The entire steaming mess we are in is entirely ideological. Britain is the most unequal country in Europe and inequality is rising steeply and what do you do? Punish the poor and reward the rich. Iain Duncan Smith is on a crusade to penalise the poor just for being poor even depriving them of the means of survival and is now handing out pink cards to Jobcentre staff to wave in the air when someone admits to being suicidal.

For poor people work is a crime being visited upon them. Nothing changes, not even our dumb acceptance of this as the status quo because it has been, and is, drummed into us by governments and the media constantly. No other narrative or view is allowed, we are regarded and treated as scum and even accused by YOU of having a culture of entitlement, an outrageous, despicable, filthy slur on our lives. No benefits for the poor, eh Mr Cameron? The poor must pay whilst the rich are rewarded. The only thing standing between your government and a general strike to crush you once and for all is the dreariness of tradition and exploitation and the world weariness of the abused and demonised poor living lives of quiet desperation.