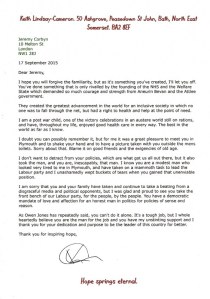 I hope you will forgive the familiarity, but as it’s something you’ve created, I’ll let you off. You’ve done something that is only rivalled by the founding of the NHS and the Welfare State which demanded so much courage and strength from Aneurin Bevan and the Attlee government.

They created the greatest advancement in the world for an inclusive society in which no one was to fall through the net, but had a right to health and help at the point of need.

I am a post war child, one of the victory celebrations in an austere world still on rations, and have, throughout my life, enjoyed good health care in every way. The best in the world as far as I know.

I doubt you can possibly remember it, but for me it was a great pleasure to meet you in Plymouth and to shake your hand and to have a picture taken with you outside the mens toilets. Sorry about that. Blame it on good friends and the exigencies of old age.

I don’t want to detract from your policies, which are what got us all out there, but it also took the man, and you are, inescapably, that man. I know you are a modest man who looked very tired to me in Plymouth, and have taken on a mammoth task to lead the Labour party and I unashamedly wept buckets of tears when you gained that unenviable position.

I am sorry that you and your family have taken and continue to take a beating from a disgraceful media and political opponents, but I was glad and proud to see you take the front bench of our Labour party, for the people, by the people. You have a democratic mandate of love and affection for an honest man in politics for policies of sense and reason.

As Owen Jones has repeatedly said, you can’t do it alone. It’s a tough job, but I whole heartedly believe you are the man for the job and you have my unstinting support and I thank you for your dedication and purpose to be the leader of this country for better.

Thank you for inspiring hope,

One thought on “Dear Jeremy,”