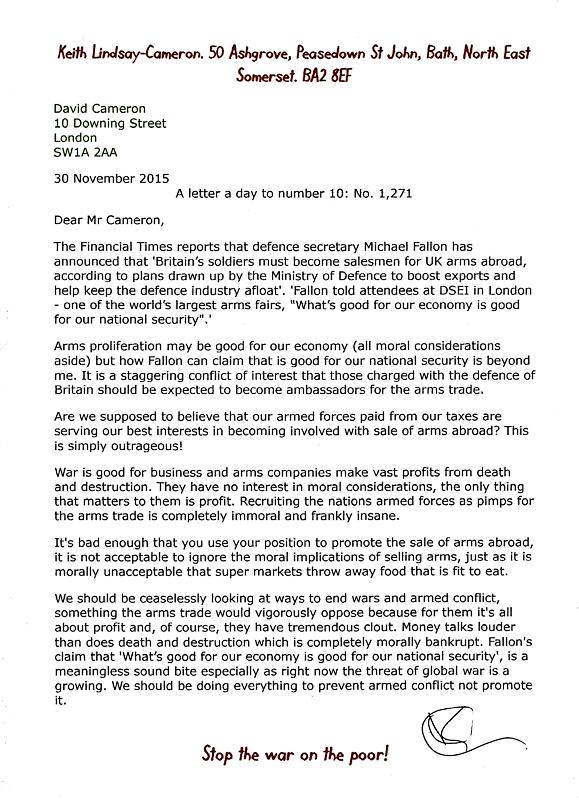 The Financial Times reports that defence secretary Michael Fallon has announced that ‘Britain’s soldiers must become salesmen for UK arms abroad, according to plans drawn up by the Ministry of Defence to boost exports and help keep the defence industry afloat’. ‘Fallon told attendees at DSEI in London – one of the world’s largest arms fairs, “What’s good for our economy is good for our national security”.’

Arms proliferation may be good for our economy (all moral considerations aside) but how Fallon can claim that is good for our national security is beyond me. It is a staggering conflict of interest that those charged with the defence of Britain should be expected to become ambassadors for the arms trade.

Are we supposed to believe that our armed forces paid from our taxes are serving our best interests in becoming involved with sale of arms abroad? This is simply outrageous!

War is good for business and arms companies make vast profits from death and destruction. They have no interest in moral considerations, the only thing that matters to them is profit. Recruiting the nations armed forces as pimps for the arms trade is completely immoral and frankly insane.

It’s bad enough that you use your position to promote the sale of arms abroad, it is not acceptable to ignore the moral implications of selling arms, just as it is morally unacceptable that super markets throw away food that is fit to eat.

We should be ceaselessly looking at ways to end wars and armed conflict, something the arms trade would vigorously oppose because for them it’s all about profit and, of course, they have tremendous clout. Money talks louder than does death and destruction which is completely morally bankrupt. Fallon’s claim that ‘What’s good for our economy is good for our national security’, is a meaningless sound bite especially as right now the threat of global war is a growing. We should be doing everything to prevent armed conflict not promote it.