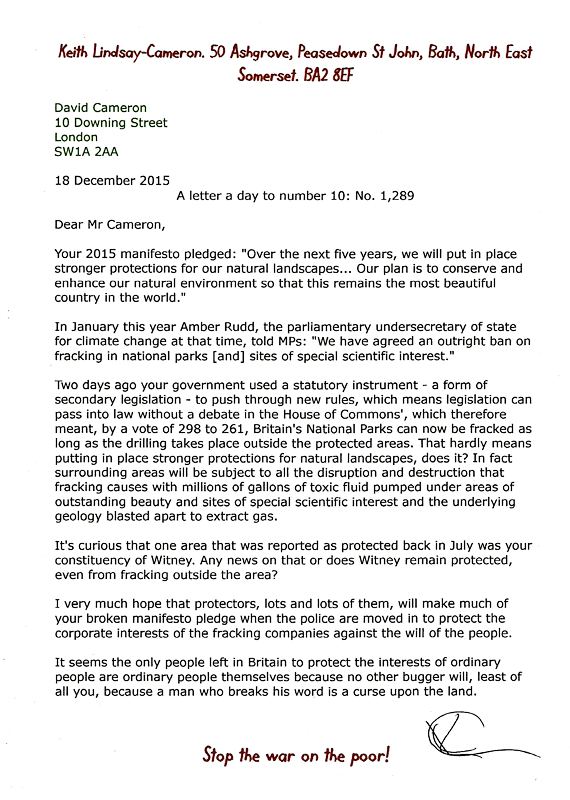 Your 2015 manifesto pledged: “Over the next five years, we will put in place stronger protections for our natural landscapes… Our plan is to conserve and enhance our natural environment so that this remains the most beautiful country in the world.”

In January this year Amber Rudd, the parliamentary undersecretary of state for climate change at that time, told MPs: “We have agreed an outright ban on fracking in national parks [and] sites of special scientific interest.”

Two days ago your government used a statutory instrument – a form of secondary legislation – to push through new rules, which means legislation can pass into law without a debate in the House of Commons’, which therefore meant, by a vote of 298 to 261, Britain’s National Parks can now be fracked as long as the drilling takes place outside the protected areas. That hardly means putting in place stronger protections for natural landscapes, does it? In fact surrounding areas will be subject to all the disruption and destruction that fracking causes with millions of gallons of toxic fluid pumped under areas of outstanding beauty and sites of special scientific interest and the underlying geology blasted apart to extract gas.

It’s curious that one area that was reported as protected back in July was your constituency of Witney. Any news on that or does Witney remain protected, even from fracking outside the area?

I very much hope that protectors, lots and lots of them, will make much of your broken manifesto pledge when the police are moved in to protect the corporate interests of the fracking companies against the will of the people.

It seems the only people left in Britain to protect the interests of ordinary people are ordinary people themselves because no other bugger will, least of all you, because a man who breaks his word is a curse upon the land.