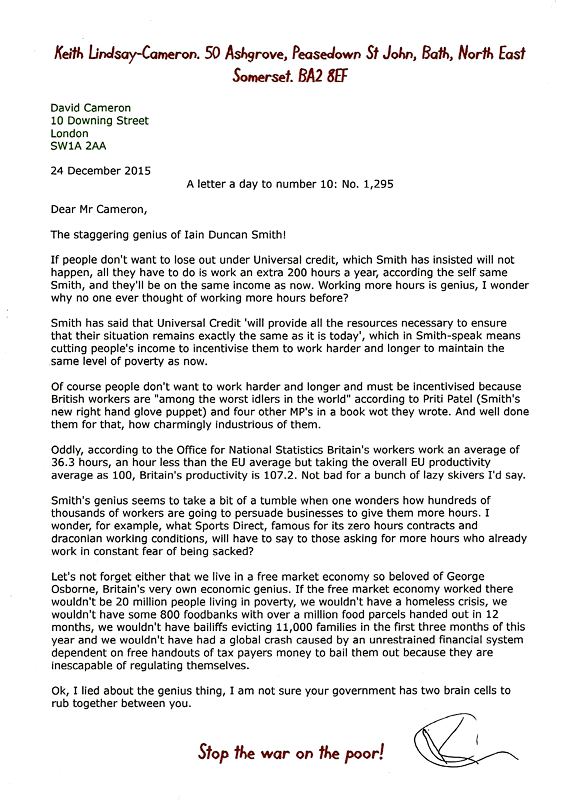 If people don’t want to lose out under Universal credit, which Smith has insisted will not happen, all they have to do is work an extra 200 hours a year, according the self same Smith, and they’ll be on the same income as now. Working more hours is genius, I wonder why no one ever thought of working more hours before?

Smith has said that Universal Credit ‘will provide all the resources necessary to ensure that their situation remains exactly the same as it is today’, which in Smith-speak means cutting people’s income to incentivise them to work harder and longer to maintain the same level of poverty as now.

Of course people don’t want to work harder and longer and must be incentivised because British workers are “among the worst idlers in the world” according to Priti Patel (Smith’s new right hand glove puppet) and four other MP’s in a book wot they wrote. And well done them for that, how charmingly industrious of them.

Oddly, according to the Office for National Statistics Britain’s workers work an average of 36.3 hours, an hour less than the EU average but taking the overall EU productivity average as 100, Britain’s productivity is 107.2. Not bad for a bunch of lazy skivers I’d say.

Smith’s genius seems to take a bit of a tumble when one wonders how hundreds of thousands of workers are going to persuade businesses to give them more hours. I wonder, for example, what Sports Direct, famous for its zero hours contracts and draconian working conditions, will have to say to those asking for more hours who already work in constant fear of being sacked?

Ok, I lied about the genius thing, I am not sure your government has two brain cells to rub together between you.