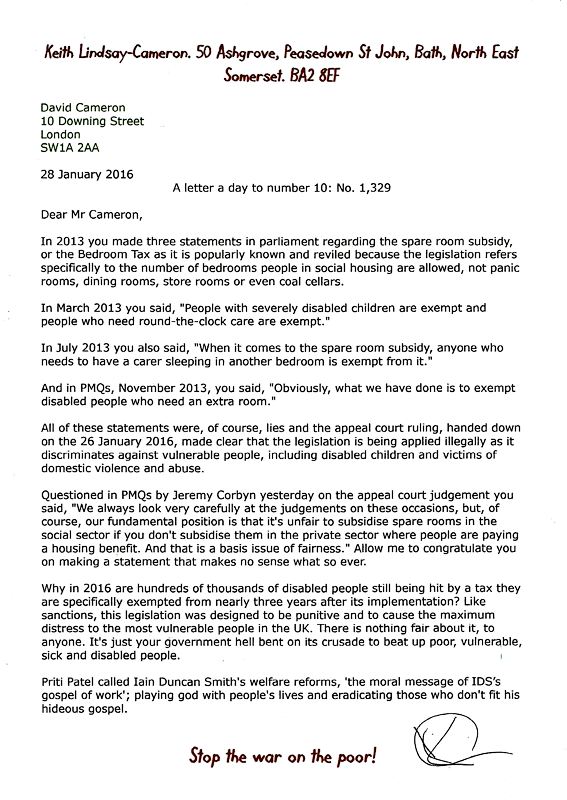 In 2013 you made three statements in parliament regarding the spare room subsidy, or the Bedroom Tax as it is popularly known and reviled because the legislation refers specifically to the number of bedrooms people in social housing are allowed, not panic rooms, dining rooms, store rooms or even coal cellars.

In March 2013 you said, “People with severely disabled children are exempt and people who need round-the-clock care are exempt.”

In July 2013 you also said, “When it comes to the spare room subsidy, anyone who needs to have a carer sleeping in another bedroom is exempt from it.”

And in PMQs, November 2013, you said, “Obviously, what we have done is to exempt disabled people who need an extra room.”

All of these statements were, of course, lies and the appeal court ruling, handed down on the 26 January 2016, made clear that the legislation is being applied illegally as it discriminates against vulnerable people, including disabled children and victims of domestic violence and abuse.

Questioned in PMQs by Jeremy Corbyn yesterday on the appeal court judgement you said, “We always look very carefully at the judgements on these occasions, but, of course, our fundamental position is that it’s unfair to subsidise spare rooms in the social sector if you don’t subsidise them in the private sector where people are paying a housing benefit. And that is a basis issue of fairness.” Allow me to congratulate you on making a statement that makes no sense what so ever.

Why in 2016 are hundreds of thousands of disabled people still being hit by a tax they are specifically exempted from nearly three years after its implementation? Like sanctions, this legislation was designed to be punitive and to cause the maximum distress to the most vulnerable people in the UK. There is nothing fair about it, to anyone. It’s just your government hell bent on its crusade to beat up poor, vulnerable, sick and disabled people.

Priti Patel MP: The bishops are blind to the moral message of IDS’s gospel of work