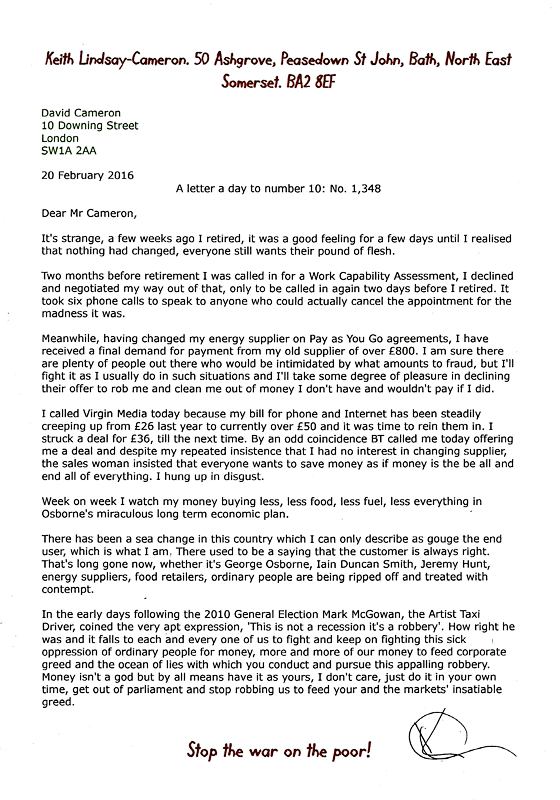 It’s strange, a few weeks ago I retired, it was a good feeling for a few days until I realised that nothing had changed, everyone still wants their pound of flesh.

Two months before retirement I was called in for a Work Capability Assessment, I declined and negotiated my way out of that, only to be called in again two days before I retired. It took six phone calls to speak to anyone who could actually cancel the appointment for the madness it was.

Meanwhile, having changed my energy supplier on Pay as You Go agreements, I have received a final demand for payment from my old supplier of over £800. I am sure there are plenty of people out there who would be intimidated by what amounts to fraud, but I’ll fight it as I usually do in such situations and I’ll take some degree of pleasure in declining their offer to rob me and clean me out of money I don’t have and wouldn’t pay if I did.

I called Virgin Media today because my bill for phone and Internet has been steadily creeping up from £26 last year to currently over £50 and it was time to rein them in. I struck a deal for £36, till the next time. By an odd coincidence BT called me today offering me a deal and despite my repeated insistence that I had no interest in changing supplier, the sales woman insisted that everyone wants to save money as if money is the be all and end all of everything. I hung up in disgust.

There has been a sea change in this country which I can only describe as gouge the end user, which is what I am. There used to be a saying that the customer is always right. That’s long gone now, whether it’s George Osborne, Iain Duncan Smith, Jeremy Hunt, energy suppliers, food retailers, ordinary people are being ripped off and treated with contempt.

In the early days following the 2010 General Election Mark McGowan, the Artist Taxi Driver, coined the very apt expression, ‘This is not a recession it’s a robbery’. How right he was and it falls to each and every one of us to fight and keep on fighting this sick oppression of ordinary people for money, more and more of our money to feed corporate greed and the ocean of lies with which you conduct and pursue this appalling robbery. Money isn’t a god but by all means have it as yours, I don’t care, just do it in your own time, get out of parliament and stop robbing us to feed your and the markets’ insatiable greed.