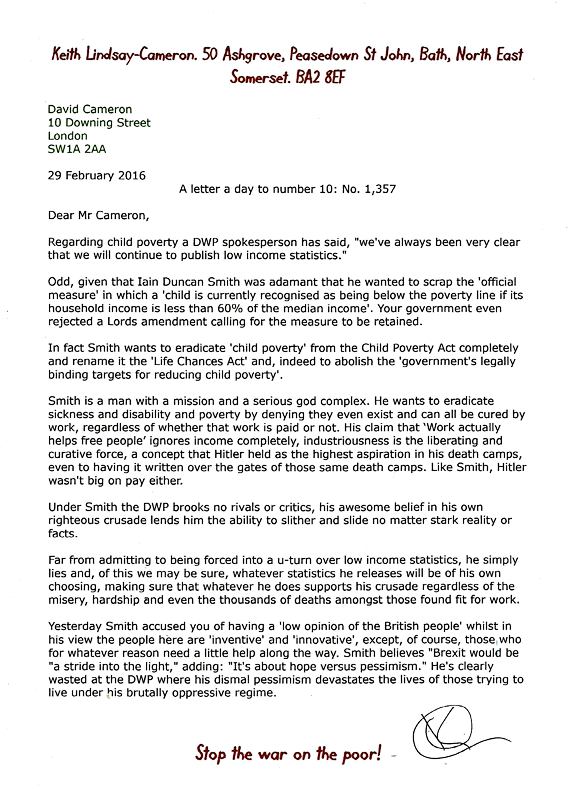 Regarding child poverty a DWP spokesperson has said, “we’ve always been very clear that we will continue to publish low income statistics.”

Odd, given that Iain Duncan Smith was adamant that he wanted to scrap the ‘official measure’ in which a ‘child is currently recognised as being below the poverty line if its household income is less than 60% of the median income’. Your government even rejected a Lords amendment calling for the measure to be retained.

In fact Smith wants to eradicate ‘child poverty’ from the Child Poverty Act completely and rename it the ‘Life Chances Act’ and, indeed to abolish the ‘government’s legally binding targets for reducing child poverty’.

Smith is a man with a mission and a serious god complex. He wants to eradicate sickness and disability and poverty by denying they even exist and can all be cured by work, regardless of whether that work is paid or not. His claim that ‘Work actually helps free people’ ignores income completely, industriousness is the liberating and curative force, a concept that Hitler held as the highest aspiration in his death camps, even to having it written over the gates of those same death camps. Like Smith, Hitler wasn’t big on pay either.

Under Smith the DWP brooks no rivals or critics, his awesome belief in his own righteous crusade lends him the ability to slither and slide no matter stark reality or facts.

Far from admitting to being forced into a u-turn over low income statistics, he simply lies and, of this we may be sure, whatever statistics he releases will be of his own choosing, making sure that whatever he does supports his crusade regardless of the misery, hardship and even the thousands of deaths amongst those found fit for work.

Yesterday Smith accused you of having a ‘low opinion of the British people’ whilst in his view the people here are ‘inventive’ and ‘innovative’, except, of course, those who for whatever reason need a little help along the way. Smith believes “Brexit would be “a stride into the light,” adding: “It’s about hope versus pessimism.” He’s clearly wasted at the DWP where his dismal pessimism devastates the lives of those trying to live under his brutally oppressive regime.