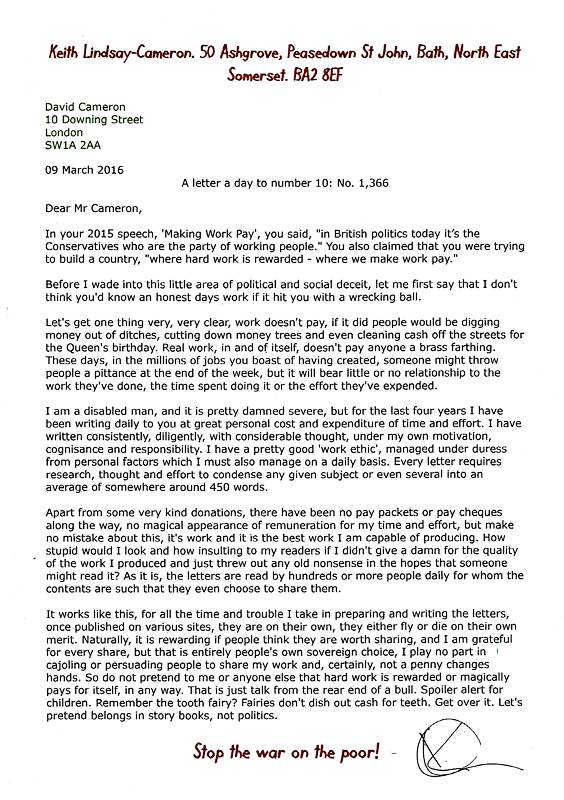 In your 2015 speech, ‘Making Work Pay’, you said, “in British politics today it’s the Conservatives who are the party of working people.” You also claimed that you were trying to build a country, “where hard work is rewarded – where we make work pay.”

Before I wade into this little area of political and social deceit, let me first say that I don’t think you’d know an honest days work if it hit you with a wrecking ball.

Let’s get one thing very, very clear, work doesn’t pay, if it did people would be digging money out of ditches, cutting down money trees and even cleaning cash off the streets for the Queen’s birthday. Real work, in and of itself, doesn’t pay anyone a brass farthing. These days, in the millions of jobs you boast of having created, someone might throw people a pittance at the end of the week, but it will bear little or no relationship to the work they’ve done, the time spent doing it or the effort they’ve expended.

I am a disabled man, and it is pretty damned severe, but for the last four years I have been writing daily to you at great personal cost and expenditure of time and effort. I have written consistently, diligently, with considerable thought, under my own motivation, cognisance and responsibility. I have a pretty good ‘work ethic’, managed under duress from personal factors which I must also manage on a daily basis. Every letter requires research, thought and effort to condense any given subject or even several into an average of somewhere around 450 words.

Apart from some very kind donations, there have been no pay packets or pay cheques along the way, no magical appearance of remuneration for my time and effort, but make no mistake about this, it’s work and it is the best work I am capable of producing. How stupid would I look and how insulting to my readers if I didn’t give a damn for the quality of the work I produced and just threw out any old nonsense in the hopes that someone might read it? As it is, the letters are read by hundreds or more people daily for whom the contents are such that they even choose to share them.

It works like this, for all the time and trouble I take in preparing and writing the letters, once published on various sites, they are on their own, they either fly or die on their own merit. Naturally, it is rewarding if people think they are worth sharing, and I am grateful for every share, but that is entirely people’s own sovereign choice, I play no part in cajoling or persuading people to share my work and, certainly, not a penny changes hands. So do not pretend to me or anyone else that hard work is rewarded or magically pays for itself, in any way. That is just talk from the rear end of a bull. Spoiler alert for children. Remember the tooth fairy? Fairies don’t dish out cash for teeth. Get over it. Let’s pretend belongs in story books, not politics.

One thought on “Work doesn’t pay, if it did the poor would all be richer than Cameron”