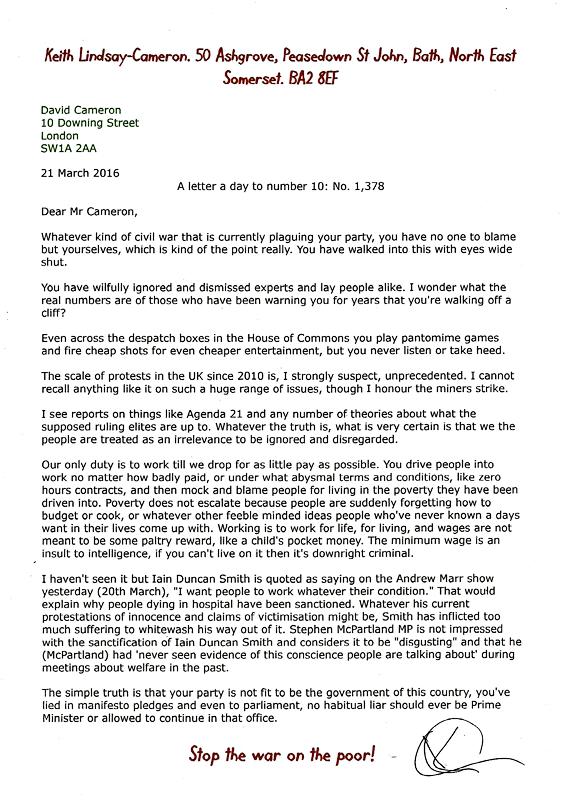 Whatever kind of civil war that is currently plaguing your party, you have no one to blame but yourselves, which is kind of the point really. You have walked into this with eyes wide shut.

You have wilfully ignored and dismissed experts and lay people alike. I wonder what the real numbers are of those who have been warning you for years that you’re walking off a cliff?

Even across the despatch boxes in the House of Commons you play pantomime games and fire cheap shots for even cheaper entertainment, but you never listen or take heed.

The scale of protests in the UK since 2010 is, I strongly suspect, unprecedented. I cannot recall anything like it on such a huge range of issues, though I honour the miners strike.

I see reports on things like Agenda 21 and any number of theories about what the supposed ruling elites are up to. Whatever the truth is, what is very certain is that we the people are treated as an irrelevance to be ignored and disregarded.

Our only duty is to work till we drop for as little pay as possible. You drive people into work no matter how badly paid, or under what abysmal terms and conditions, like zero hours contracts, and then mock and blame people for living in the poverty they have been driven into. Poverty does not escalate because people are suddenly forgetting how to budget or cook, or whatever other feeble minded ideas people who’ve never known a days want in their lives come up with. Working is to work for life, for living, and wages are not meant to be some paltry reward, like a child’s pocket money. The minimum wage is an insult to intelligence, if you can’t live on it then it’s downright criminal.

I haven’t seen it but Iain Duncan Smith is quoted as saying on the Andrew Marr show yesterday (20th March), “I want people to work whatever their condition.” That would explain why people dying in hospital have been sanctioned. Whatever his current protestations of innocence and claims of victimisation might be, Smith has inflicted too much suffering to whitewash his way out of it. Stephen McPartland MP is not impressed with the sanctification of Iain Duncan Smith and considers it to be “disgusting” and that he (McPartland) had ‘never seen evidence of this conscience people are talking about’ during meetings about welfare in the past.

The simple truth is that your party is not fit to be the government of this country, you’ve lied in manifesto pledges and even to parliament, no habitual liar should ever be Prime Minister or allowed to continue in that office.

IDS on #marr
"I want people to work whatever their condition "
BUSTED !