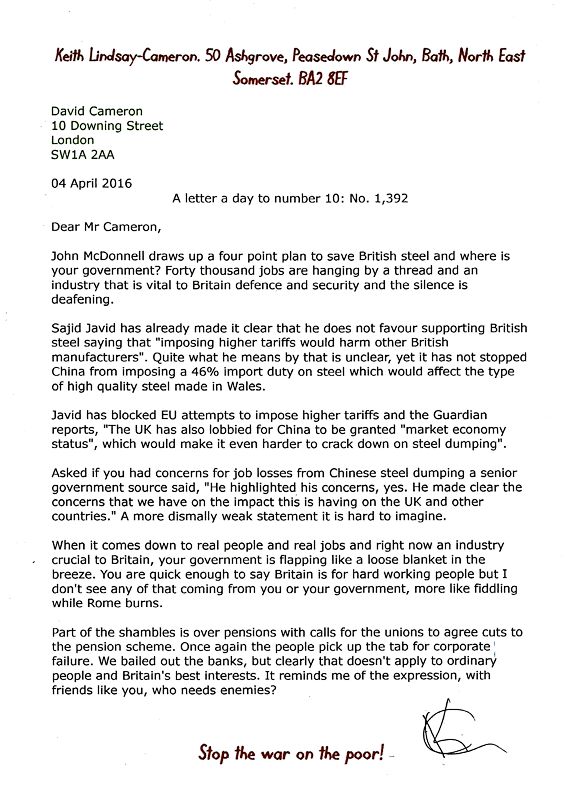 John McDonnell draws up a four point plan to save British steel and where is your government? Forty thousand jobs are hanging by a thread and an industry that is vital to Britain defence and security and the silence is deafening.

Sajid Javid has already made it clear that he does not favour supporting British steel saying that “imposing higher tariffs would harm other British manufacturers”. Quite what he means by that is unclear, yet it has not stopped China from imposing a 46% import duty on steel which would affect the type of high quality steel made in Wales.

Javid has blocked EU attempts to impose higher tariffs and the Guardian reports, “The UK has also lobbied for China to be granted “market economy status”, which would make it even harder to crack down on steel dumping”.

Asked if you had concerns for job losses from Chinese steel dumping a senior government source said, “He highlighted his concerns, yes. He made clear the concerns that we have on the impact this is having on the UK and other countries.” A more dismally weak statement it is hard to imagine.

When it comes down to real people and real jobs and right now an industry crucial to Britain, your government is flapping like a loose blanket in the breeze. You are quick enough to say Britain is for hard working people but I don’t see any of that coming from you or your government, more like fiddling while Rome burns.

Part of the shambles is over pensions with calls for the unions to agree cuts to the pension scheme. Once again the people pick up the tab for corporate failure. We bailed out the banks, but clearly that doesn’t apply to ordinary people and Britain’s best interests. It reminds me of the expression, with friends like you, who needs enemies?