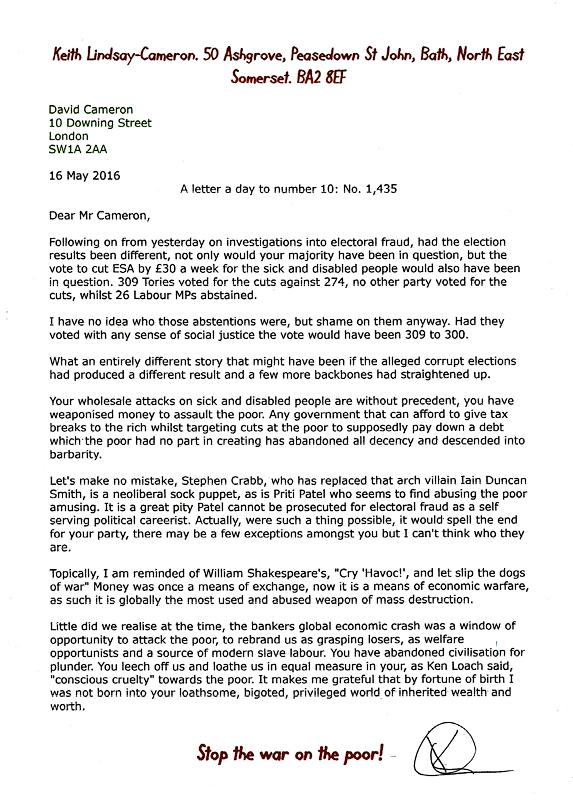 Following on from yesterday on investigations into electoral fraud, had the election results been different, not only would your majority have been in question, but the vote to cutES ESA by £30 a week for the sick and disabled people would also have been in question. 309 Tories voted for the cuts against 274, no other party voted for the cuts, whilst 26 Labour MPs abstained.

I have no idea who those abstentions were, but shame on them anyway. Had they voted with any sense of social justice the vote would have been 309 to 300.

What an entirely different story that might have been if the alleged corrupt elections had produced a different result and a few more backbones had straightened up.

Your wholesale attacks on sick and disabled people are without precedent, you have weaponised money to assault the poor. Any government that can afford to give tax breaks to the rich whilst targeting cuts at the poor to supposedly pay down a debt which the poor had no part in creating has abandoned all decency and descended into barbarity.

Let’s make no mistake, Stephen Crabb, who has replaced that arch villain Iain Duncan Smith, is a neoliberal sock puppet, as is Priti Patel who seems to find abusing the poor amusing. It is a great pity Patel cannot be prosecuted for electoral fraud as a self serving political careerist. Actually, were such a thing possible, it would spell the end for your party, there may be a few exceptions amongst you but I can’t think who they are.

Topically, I am reminded of William Shakespeare’s, “Cry ‘Havoc!’, and let slip the dogs of war” Money was once a means of exchange, now it is a means of economic warfare, as such it is globally the most used and abused weapon of mass destruction.

Little did we realise at the time, the bankers global economic crash was a window of opportunity to attack the poor, to rebrand us as grasping losers, as welfare opportunists and a source of modern slave labour. You have abandoned civilisation for plunder. You leech off us and loathe us in equal measure in your, as Ken Loach said, “conscious cruelty” towards the poor. It makes me grateful that by fortune of birth I was not born into your loathsome, bigoted, privileged world of inherited wealth and worth.