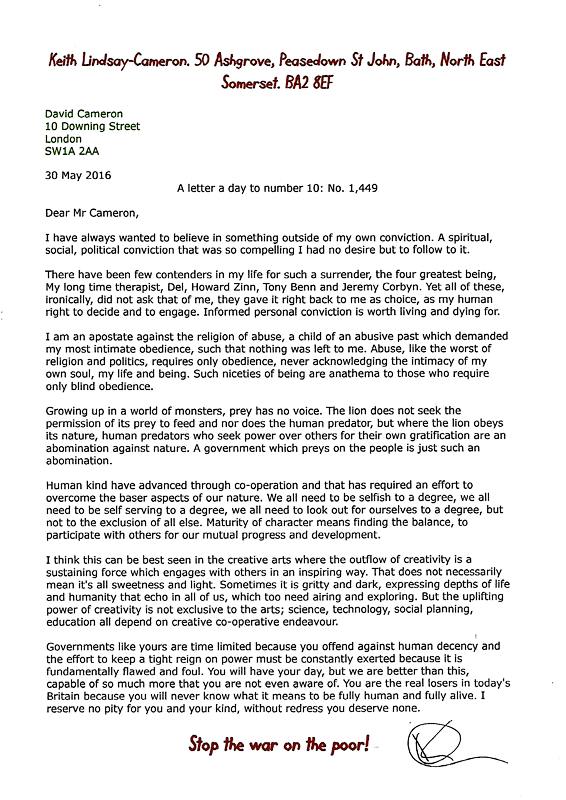 I have always wanted to believe in something outside of my own conviction. A spiritual, social, political conviction that was so compelling I had no desire but to follow to it.

There have been few contenders in my life for such a surrender, the four greatest being, My long time therapist, Del, Howard Zinn, Tony Benn and Jeremy Corbyn. Yet all of these, ironically, did not ask that of me, they gave it right back to me as choice, as my human right to decide and to engage. Informed personal conviction is worth living and dying for.

I am an apostate against the religion of abuse, a child of an abusive past which demanded my most intimate obedience, such that nothing was left to me. Abuse, like the worst of religion and politics, requires only obedience, never acknowledging the intimacy of my own soul, my life and being. Such niceties of being are anathema to those who require only blind obedience.

Growing up in a world of monsters, prey has no voice. The lion does not seek the permission of its prey to feed and nor does the human predator, but where the lion obeys its nature, human predators who seek power over others for their own gratification are an abomination against nature. A government which preys on the people is just such an abomination.

I think this can be best seen in the creative arts where the outflow of creativity is a sustaining force which engages with others in an inspiring way. That does not necessarily mean it’s all sweetness and light. Sometimes it is gritty and dark, expressing depths of life and humanity that echo in all of us, which too need airing and exploring. But the uplifting power of creativity is not exclusive to the arts; science, technology, social planning, education all depend on creative co-operative endeavour.

Governments like yours are time limited because you offend against human decency and the effort to keep a tight reign on power must be constantly exerted because it is fundamentally flawed and foul. You will have your day, but we are better than this, capable of so much more that you are not even aware of. You are the real losers in today’s Britain because you will never know what it means to be fully human and fully alive. I reserve no pity for you and your kind, without redress you deserve none.