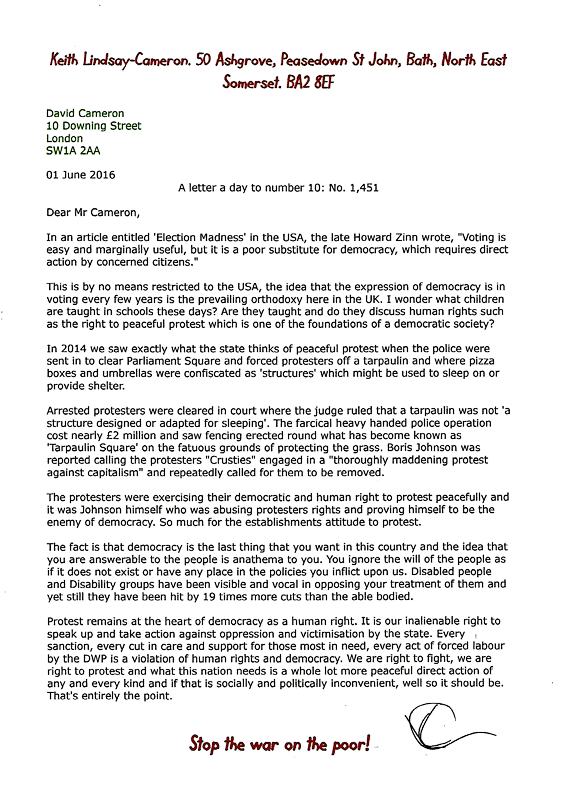 In an article entitled ‘Election Madness’ in the USA, the late Howard Zinn wrote, “Voting is easy and marginally useful, but it is a poor substitute for democracy, which requires direct action by concerned citizens.”

This is by no means restricted to the USA, the idea that the expression of democracy is in voting every few years is the prevailing orthodoxy here in the UK. I wonder what children are taught in schools these days? Are they taught and do they discuss human rights such as the right to peaceful protest which is one of the foundations of a democratic society?

In 2014 we saw exactly what the state thinks of peaceful protest when the police were sent in to clear Parliament Square and forced protesters off a tarpaulin and where pizza boxes and umbrellas were confiscated as ‘structures’ which might be used to sleep on or provide shelter.

Arrested protesters were cleared in court where the judge ruled that a tarpaulin was not ‘a structure designed or adapted for sleeping’. The farcical heavy handed police operation cost nearly £2 million and saw fencing erected round what has become known as ‘Tarpaulin Square’ on the fatuous grounds of protecting the grass. Boris Johnson was reported calling the protesters “Crusties” engaged in a “thoroughly maddening protest against capitalism” and repeatedly called for them to be removed.

The protesters were exercising their democratic and human right to protest peacefully and it was Johnson himself who was abusing protesters rights and proving himself to be the enemy of democracy. So much for the establishments attitude to protest.

The fact is that democracy is the last thing that you want in this country and the idea that you are answerable to the people is anathema to you. You ignore the will of the people as if it does not exist or have any place in the policies you inflict upon us. Disabled people and Disability groups have been visible and vocal in opposing your treatment of them and yet still they have been hit by 19 times more cuts than the able bodied.

Protest remains at the heart of democracy as a human right. It is our inalienable right to speak up and take action against oppression and victimisation by the state. Every sanction, every cut in care and support for those most in need, every act of forced labour by the DWP is a violation of human rights and democracy. We are right to fight, we are right to protest and what this nation needs is a whole lot more peaceful direct action of any and every kind and if that is socially and politically inconvenient, well so it should be. That’s entirely the point.