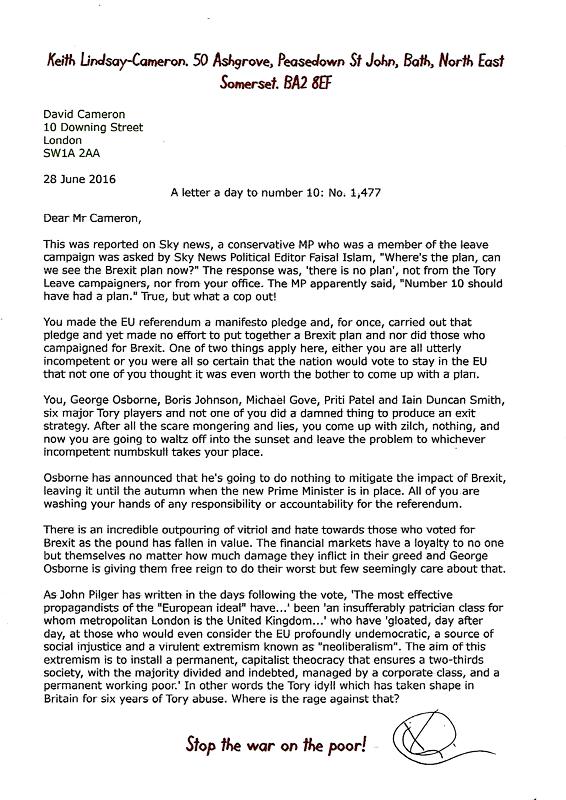 This was reported on Sky news, a conservative MP who was a member of the leave campaign was asked by Sky News Political Editor Faisal Islam, “Where’s the plan, can we see the Brexit plan now?” The response was, ‘there is no plan’, not from the Tory Leave campaigners, nor from your office. The MP apparently said, “Number 10 should have had a plan.” True, but what a cop out!

You made the EU referendum a manifesto pledge and, for once, carried out that pledge and yet made no effort to put together a Brexit plan and nor did those who campaigned for Brexit. One of two things apply here, either you are all utterly incompetent or you were all so certain that the nation would vote to stay in the EU that not one of you thought it was even worth the bother to come up with a plan.

You, George Osborne, Boris Johnson, Michael Gove, Priti Patel and Iain Duncan Smith, six major Tory players and not one of you did a damned thing to produce an exit strategy. After all the scare mongering and lies, you come up with zilch, nothing, and now you are going to waltz off into the sunset and leave the problem to whichever incompetent numbskull takes your place.

Osborne has announced that he’s going to do nothing to mitigate the impact of Brexit, leaving it until the autumn when the new Prime Minister is in place. All of you are washing your hands of any responsibility or accountability for the referendum.

There is an incredible outpouring of vitriol and hate towards those who voted for Brexit as the pound has fallen in value. The financial markets have a loyalty to no one but themselves no matter how much damage they inflict in their greed and George Osborne is giving them free reign to do their worst but few seemingly care about that.

As John Pilger has written in the days following the vote, ‘The most effective propagandists of the “European ideal” have…’ been ‘an insufferably patrician class for whom metropolitan London is the United Kingdom…’ who have ‘gloated, day after day, at those who would even consider the EU profoundly undemocratic, a source of social injustice and a virulent extremism known as “neoliberalism”. The aim of this extremism is to install a permanent, capitalist theocracy that ensures a two-thirds society, with the majority divided and indebted, managed by a corporate class, and a permanent working poor.’ In other words the Tory idyll which has taken shape in Britain for six years of Tory abuse. Where is the rage against that?