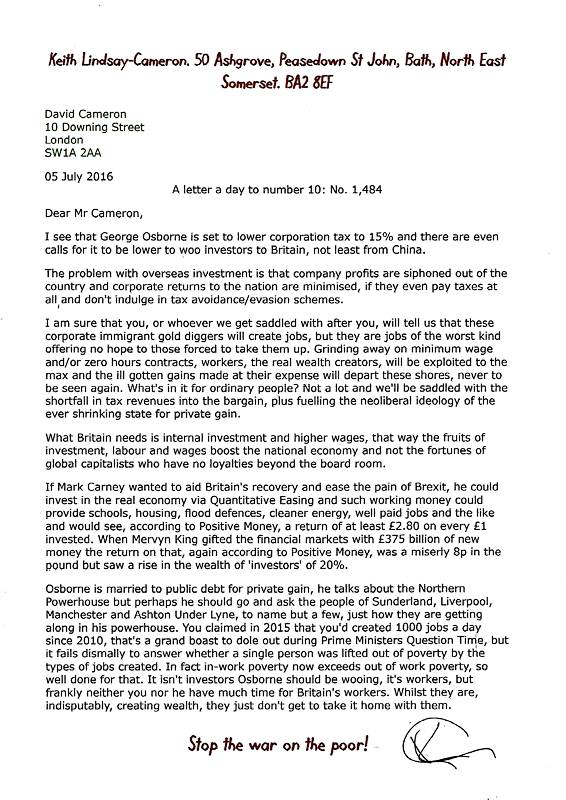 I see that George Osborne is set to lower corporation tax to 15% and there are even calls for it to be lower to woo investors to Britain, not least from China.

The problem with overseas investment is that company profits are siphoned out of the country and corporate returns to the nation are minimised, if they even pay taxes at all and don’t indulge in tax avoidance/evasion schemes.

I am sure that you, or whoever we get saddled with after you, will tell us that these corporate immigrant gold diggers will create jobs, but they are jobs of the worst kind offering no hope to those forced to take them up. Grinding away on minimum wage and/or zero hours contracts, workers, the real wealth creators, will be exploited to the max and the ill gotten gains made at their expense will depart these shores, never to be seen again. What’s in it for ordinary people? Not a lot and we’ll be saddled with the shortfall in tax revenues into the bargain, plus fuelling the neoliberal ideology of the ever shrinking state for private gain.

What Britain needs is internal investment and higher wages, that way the fruits of investment, labour and wages boost the national economy and not the fortunes of global capitalists who have no loyalties beyond the board room.

If Mark Carney wanted to aid Britain’s recovery and ease the pain of Brexit, he could invest in the real economy via Quantitative Easing and such working money could provide schools, housing, flood defences, cleaner energy, well paid jobs and the like and would see, according to Positive Money, a return of at least £2.80 on every £1 invested. When Mervyn King gifted the financial markets with £375 billion of new money the return on that, again according to Positive Money, was a miserly 8p in the pound but saw a rise in the wealth of ‘investors’ of 20%.

Osborne is married to public debt for private gain, he talks about the Northern Powerhouse but perhaps he should go and ask the people of Sunderland, Liverpool, Manchester and Ashton Under Lyne, to name but a few, just how they are getting along in his powerhouse. You claimed in 2015 that you’d created 1000 jobs a day since 2010, that’s a grand boast to dole out during Prime Ministers Question Time, but it fails dismally to answer whether a single person was lifted out of poverty by the types of jobs created. In fact in-work poverty now exceeds out of work poverty, so well done for that. It isn’t investors Osborne should be wooing, it’s workers, but frankly neither you nor he have much time for Britain’s workers. Whilst they are, indisputably, creating wealth, they just don’t get to take it home with them.

How to waste £445 billion? – The Failure of Quantitative Easing