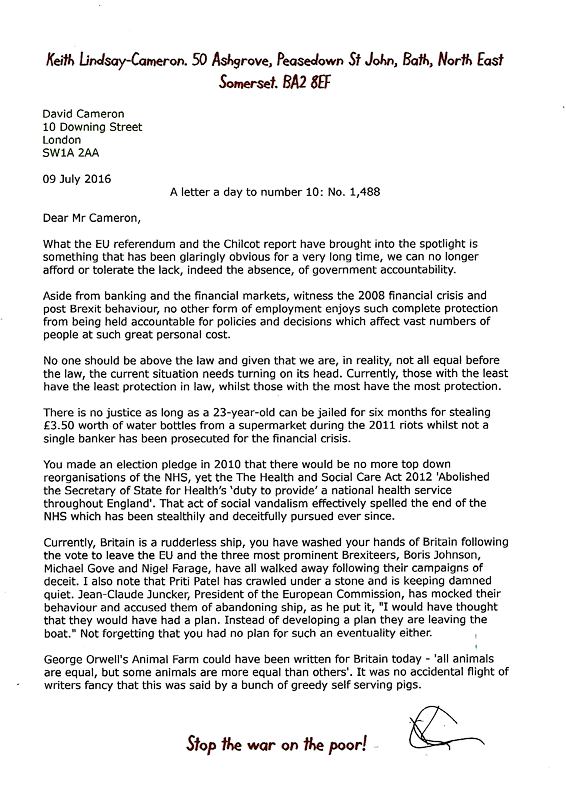 What the EU referendum and the Chilcot report have brought into the spotlight is something that has been glaringly obvious for a very long time, we can no longer afford or tolerate the lack, indeed the absence, of government accountability.

Aside from banking and the financial markets, witness the 2008 financial crisis and post Brexit behaviour, no other form of employment enjoys such complete protection from being held accountable for policies and decisions which affect vast numbers of people at such great personal cost.

There is no justice as long as a 23-year-old can be jailed for six months for stealing £3.50 worth of water bottles from a supermarket during the 2011 riots whilst not a single banker has been prosecuted for the financial crisis.

You made an election pledge in 2010 that there would be no more top down reorganisations of the NHS, yet the The Health and Social Care Act 2012 ‘Abolished the Secretary of State for Health’s ‘duty to provide’ a national health service throughout England’. That act of social vandalism effectively spelled the end of the NHS which has been stealthily and deceitfully pursued ever since.

Currently, Britain is a rudderless ship, you have washed your hands of Britain following the vote to leave the EU and the three most prominent Brexiteers, Boris Johnson, Michael Gove and Nigel Farage, have all walked away following their campaigns of deceit. I also note that Priti Patel has crawled under a stone and is keeping damned quiet. Jean-Claude Juncker, President of the European Commission, has mocked their behaviour and accused them of abandoning ship, as he put it, “I would have thought that they would have had a plan. Instead of developing a plan they are leaving the boat.” Not forgetting that you had no plan for such an eventuality either.

George Orwell’s Animal Farm could have been written for Britain today – ‘all animals are equal, but some animals are more equal than others’. It was no accidental flight of writers fancy that this was said by a bunch of greedy self serving pigs.

The Health and Social Care Act 2012

5 thoughts on “If those in power can evade justice, there is no justice”