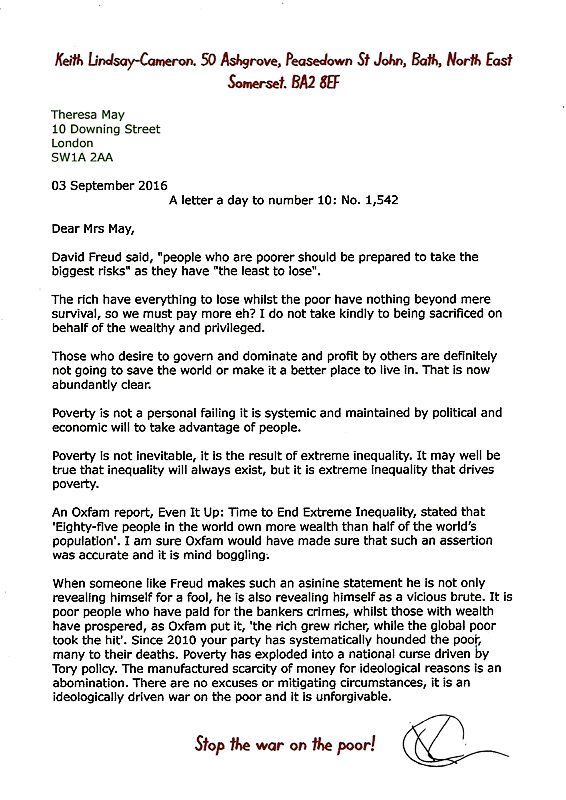 David Freud said, “people who are poorer should be prepared to take the biggest risks” as they have “the least to lose”.

The rich have everything to lose whilst the poor have nothing beyond mere survival, so we must pay more eh? I do not take kindly to being sacrificed on behalf of the wealthy and privileged.

Those who desire to govern and dominate and profit by others are definitely not going to save the world or make it a better place to live in. That is now abundantly clear.

Poverty is not a personal failing it is systemic and maintained by political and economic will to take advantage of people.

An Oxfam report, Even It Up: Time to End Extreme Inequality, stated that ‘Eighty-five people in the world own more wealth than half of the world’s population’. I am sure Oxfam would have made sure that such an assertion was accurate and it is mind boggling.

When someone like Freud makes such an asinine statement he is not only revealing himself for a fool, he is also revealing himself as a vicious brute. It is poor people who have paid for the bankers crimes, whilst those with wealth have prospered, as Oxfam put it, ‘the rich grew richer, while the global poor took the hit’. Since 2010 your party has systematically hounded the poor, many to their deaths. Poverty has exploded into a national curse driven by Tory policy. The manufactured scarcity of money for ideological reasons is an abomination. There are no excuses or mitigating circumstances, it is an ideologically driven war on the poor and it is unforgivable.

3 thoughts on “Poverty, the obscenity that is driven by political will”