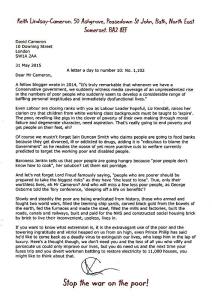 A fellow blogger wrote in 2014, “It’s truly remarkable that whenever we have a Conservative government, we suddenly witness media coverage of an unprecedented rise in the numbers of poor people who suddenly seem to develop a considerable range of baffling personal ineptitudes and immediately dysfunctional lives.”

Even Labour are closing ranks with you as Labour Leader hopeful, Liz Kendall, raises her clarion cry that children from white working class backgrounds must be taught to ‘aspire’. The poor, revelling like pigs in the clover of poverty of their own making through moral failure and degenerate character, need aspiration. That’s really going to end poverty and get people on their feet, eh?

Of course we mustn’t forget Iain Duncan Smith who claims people are going to food banks because they get divorced, ill or addicted to drugs, adding it is “ridiculous to blame the Government” as he readies the noose of yet more punitive cuts to welfare currently predicted to target the working poor and disabled people.

Baroness Jenkin tells us that poor people are going hungry because “poor people don’t know how to cook”, her solution? Let them eat porridge.

And let’s not forget Lord Freud famously saying, “people who are poorer should be prepared to take the biggest risks” as they have “the least to lose”. True, only their worthless lives, eh Mr Cameron? And who will miss a few less poor people, as George Osborne told the Tory conference, ‘sleeping off a life on benefits’?

Slowly and steadily the poor are being eradicated from history, those who armed and fought two world wars, filled the teeming ship yards, carved black gold from the bowels of the earth, fed the furnaces and made the steel, filled the mills and factories, built the roads, canals and railways, built and paid for the NHS and constructed social housing brick by brick to live their inconvenient, useless, lives in.

If you want to know what extremism is, it is the extravagant use of the poor and the towering ingratitude and vitriol heaped on us from on high, even Prince Philip has said he’d like to come back as a deadly virus to extinguish our lives, who keep him in the lap of luxury. Here’s a thought though, we don’t need you and the loss of all you who vilify and persecute us could only improve our lives, but you do need us and the next time your fuses trip and you divert workmen battling to restore electricity to 11,000 houses, you might like to think about that.