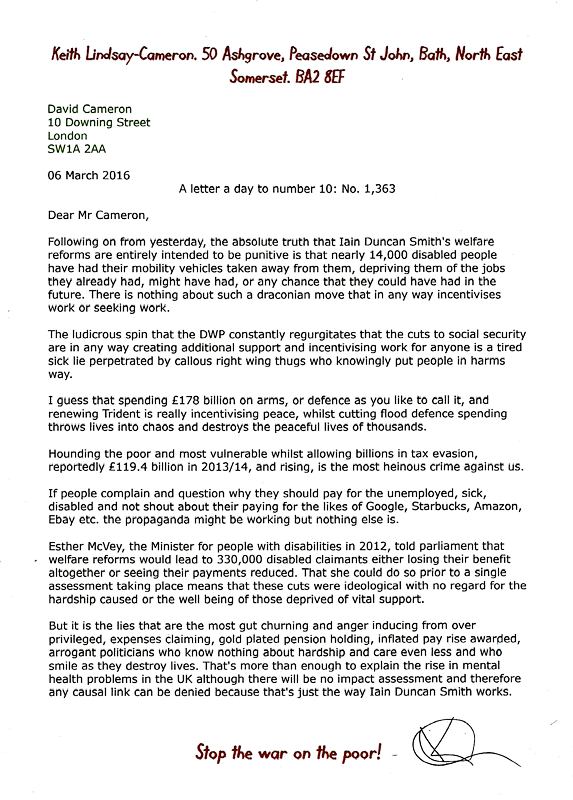 Following on from yesterday, the absolute truth that Iain Duncan Smith’s welfare reforms are entirely intended to be punitive is that nearly 14,000 disabled people have had their mobility vehicles taken away from them, depriving them of the jobs they already had, might have had, or any chance that they could have had in the future. There is nothing about such a draconian move that in any way incentivises work or seeking work.

The ludicrous spin that the DWP constantly regurgitates that the cuts to social security are in any way creating additional support and incentivising work for anyone is a tired sick lie perpetrated by callous right wing thugs who knowingly put people in harms way.

I guess that spending £178 billion on arms, or defence as you like to call it, and renewing Trident is really incentivising peace, whilst cutting flood defence spending throws lives into chaos and destroys the peaceful lives of thousands.

Hounding the poor and most vulnerable whilst allowing billions in tax evasion, reportedly £119.4 billion in 2013/14, and rising, is the most heinous crime against us.

If people complain and question why they should pay for the unemployed, sick, disabled and not shout about their paying for the likes of Google, Starbucks, Amazon, Ebay etc. the propaganda might be working but nothing else is.

Esther McVey, the Minister for people with disabilities in 2012, told parliament that welfare reforms would lead to 330,000 disabled claimants either losing their benefit altogether or seeing their payments reduced. That she could do so prior to a single assessment taking place means that these cuts were ideological with no regard for the hardship caused or the well being of those deprived of vital support.

But it is the lies that are the most gut churning and anger inducing from over privileged, expenses claiming, gold plated pension holding, inflated pay rise awarded, arrogant politicians who know nothing about hardship and care even less and who smile as they destroy lives. That’s more than enough to explain the rise in mental health problems in the UK although there will be no impact assessment and therefore any causal link can be denied because that’s just the way Iain Duncan Smith works.

One thought on “The lies that destroy lives”