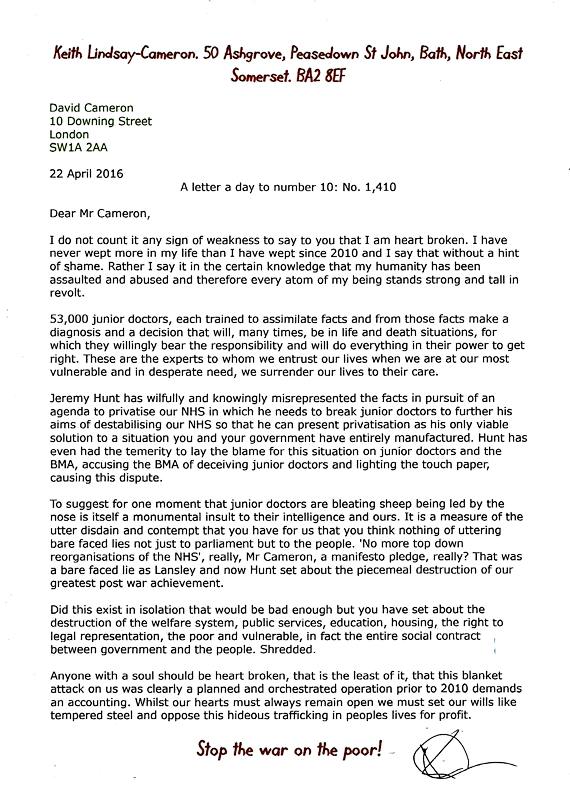 I do not count it any sign of weakness to say to you that I am heart broken. I have never wept more in my life than I have wept since 2010 and I say that without a hint of shame. Rather I say it in the certain knowledge that my humanity has been assaulted and abused and therefore every atom of my being stands strong and tall in revolt.

53,000 junior doctors, each trained to assimilate facts and from those facts make a diagnosis and a decision that will, many times, be in life and death situations, for which they willingly bear the responsibility and will do everything in their power to get right. These are the experts to whom we entrust our lives when we are at our most vulnerable and in desperate need, we surrender our lives to their care.

Jeremy Hunt has wilfully and knowingly misrepresented the facts in pursuit of an agenda to privatise our NHS in which he needs to break junior doctors to further his aims of destabilising our NHS so that he can present privatisation as his only viable solution to a situation you and your government have entirely manufactured. Hunt has even had the temerity to lay the blame for this situation on junior doctors and the BMA, accusing the BMA of deceiving junior doctors and lighting the touch paper, causing this dispute.

To suggest for one moment that junior doctors are bleating sheep being led by the nose is itself a monumental insult to their intelligence and ours. It is a measure of the utter disdain and contempt that you have for us that you think nothing of uttering bare faced lies not just to parliament but to the people. ‘No more top down reorganisations of the NHS’, really, Mr Cameron, a manifesto pledge, really? That was a bare faced lie as Lansley and now Hunt set about the piecemeal destruction of our greatest post war achievement.

Did this exist in isolation that would be bad enough but you have set about the destruction of the welfare system, public services, education, housing, the right to legal representation, the poor and vulnerable, in fact the entire social contract between government and the people. Shredded.

Anyone with a soul should be heart broken, that is the least of it, that this blanket attack on us was clearly a planned and orchestrated operation prior to 2010 demands an accounting. Whilst our hearts must always remain open we must set our wills like tempered steel and oppose this hideous trafficking in peoples lives for profit.

One thought on “The government trafficking in peoples lives for profit”